As any change must begin somewhere, it is the single individual who will experience it and carry it through. The change must indeed begin with an individual; it might be any one of us. Nobody can afford to look round and to wait for somebody else to do what he is loath to do himself.  (Jung 1950/1989, para. 599)

A post by Catriona Wrottesley to mark the Journal of Analytical Psychology's Special Issue: Our Environmental and Climate Crisis

From the 1960s onwards, climate scientists have warned of the greenhouse gas effect. Their timely warnings were ignored, even vilified and eventually, in desperation, many have joined Scientist Rebellion, a global movement for climate action. Risking arrest, these scientist-activists have blockaded oil refineries, committed to civil disobedience to communicate urgent truths.

What does it take to make people and governments wake up to the existential threat we face? Nobody as yet has come up with the answer.

Filmmakers provide immersive experiences, with images and compelling narratives of flood, fire, hurricanes and plague, while writers of cli-fi novels (a term for climate fiction invented by journalist Dan Bloom) put their narrative skills to work in the attempt to breach our heavily-fortified defences against awareness that the world is on the edge of disaster. However, when the scale of the threat is planetwide, feelings of powerlessness, anxiety and despair can set in.

Humour can be more effective than fear

Using Doomsday scenarios to turn up the volume on fear is not always effective, as those with expertise in social marketing (which focuses on influencing behaviour to achieve a ‘common good’) have concluded. More effective is ‘the use of positive reinforcement appeals aimed at the good behavior, the use of humor, and, for younger audiences, the use of postmodern irony’ (Hastings et al. 2004, p. 961).

These findings are evidenced in the humour and a form of playfulness that are evident in some of the responses to climate disaster that are coming from people in their twenties, a demographic dubbed Generation Z by the media.

A tube of super glue, a tin of tomato soup, and a friend with a mobile phone to film were all two young climate activists needed to grab the attention of millions. In silence, Phoebe Plummer, 21, and Anna Holland, 20, (both wearing ‘Just Stop Oil’ T-Shirts), tugged the ring pulls from their cans of soup and threw the contents at Van Gogh’s ‘Vase with Fifteen Sunflowers’ (estimated value £72.5million) in London’s National Gallery.

As soup slid down the protective glass, each woman glued one hand to the wall. Facing the camera and startled onlookers, Plummer shouted: ‘What is worth more, art or life?’ and her co-activist Holland continued: ‘Is it worth more than food? More than justice? Are you more concerned about the protection of a painting or the protection of our planet and people?’

In subsequent news coverage Plummer described their stunt as ‘ridiculous’, while emphasizing that their message and their cause were deadly serious.

While activism and protest attract arrest, fines and jail sentences, arouse criticism, anger and even hatred, they are also bold and highly effective in grabbing the attention of millions in a way that more mainstream forms of communication fail to do.

In addition to provocations by climate-activists like Plummer and Holland, determined to disrupt the status quo to force change, this summer has also seen a series of initiatives by Generation Z-ers determined to make a positive difference rather than to succumb to chronic climate-dread and despair. For this generation, harnessing the viral power of the Internet and social media to spread their message, comes naturally.

In July, the Guardian newspaper reported on the way that certain Generation Z and users of the social media site TikTok, were responding to the threat that hangs over humanity. Their article included Caulin Donaldson, 26, (1.4m followers on TikTok) who had been picking up litter from Florida’s beaches every day for more than 700 days: ‘I was really mad about it. So I went to my first ever beach clean-up and the dude was like, “bro, all of us are mad, but you’ve got to fight this with positivity”. I tried it and it did work – I was getting more reciprocation from the positive messages’. Another Gen Z-er, Franziska Trautmann, 24, has set up a glass recycling plant to turn glass bottles into sand to replace what is being lost to Louisiana’s beaches due to coastal erosion.

Plummer and Holland, Donaldson and Trautman, have chosen to harness their hopefulness, creativity and playfulness to bring about change. These 20-somethings are taking a stand to protest against inaction, against despair and against the complacency and vested interests of older generations responsible for the climate catastrophe humanity now faces. Each is engaged in serious action, while at the same time evincing the joyfulness that accompanies creativity.

They see the point of fighting for the planet’s future, fighting for their lives as psychoanalyst Joseph Dodds (Czech Republic) puts it in his paper ‘Dancing at the end of the world? Psychoanalysis, climate change and joy’. He writes:

Joy involves a simultaneous affirmation of both our uniqueness and our togetherness, not only as humans but with all forms of life and the web of life itself. If we were to allow ourselves to actually enjoy our lives, we just might fight harder against our extinction.

You can read Dodds’ paper in the Journal of Analytical Psychology’s November 2022 Special Issue on our environmental and climate crisis, guest-edited by Deputy-Editor Amanda Dowd (Australia). 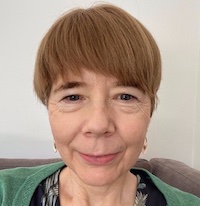 CATRIONA WROTTESLEY MA is a Jungian analyst (Society of Analytical Psychology, London) and senior couple psychoanalytic psychotherapist (Tavistock Relationships, London). She writes and reviews for a number of journals. Her particular interests are the nature of psychic reality and subjectivity, transgenerational transmission of trauma, analytical psychology, and couple relationships. Her practice is in St Albans, Enfield and online.